ADDITIONAL INFORMATION:
During the period for submission of offers Tenderers may require additional information or clarifications regarding the tender documentation only by requests in written form submitted on e-mail: p.milas@altpro.hr. The offer,together with other appropriate documentation is made in Croatian or English language. The price of the offer is stated in Croatian kuna (HRK) or in Euros (EUR). The offers shall be submitted in a sealed envelope, directly to the Contracting Authority or by postal services to the address: ALTPRO d.o.o., Velika cesta 41, 10020 Zagreb – Odra. 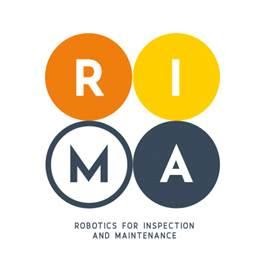 This project has received funding from the European Union’s Horizon 2020 research and innovation programme within the framework of the RIMA – Robotics for Inspection and Maintenance Project funded under grant agreement No [824990].

The development of new robotic technologies and sensors enables automation and a faster way of carrying out inspections and maintenance of railway infrastructure. One such area is the inspection of dangerous places on railway lines that are endangered due to landslides, falling rocks, floods, and other hazards. The proposed concept with InspectRAIL autonomous mobile robots will enable more frequent and faster inspections.

InspectRAIL introduces an entirely new concept based on mobile inspection robots that inspect dangerous sections autonomously or on external command. The robots will move through dangerous places along the railway lines on steel cables stretched between the catenary masts. The robots will scan the situation on site and automatically send the data to the Intelligent Control System (ICS), to the signalling system and to the traffic control and maintenance centre. On sections with the assessed highest probability of dangerous events, several robots will move autonomously along the line at the same time.