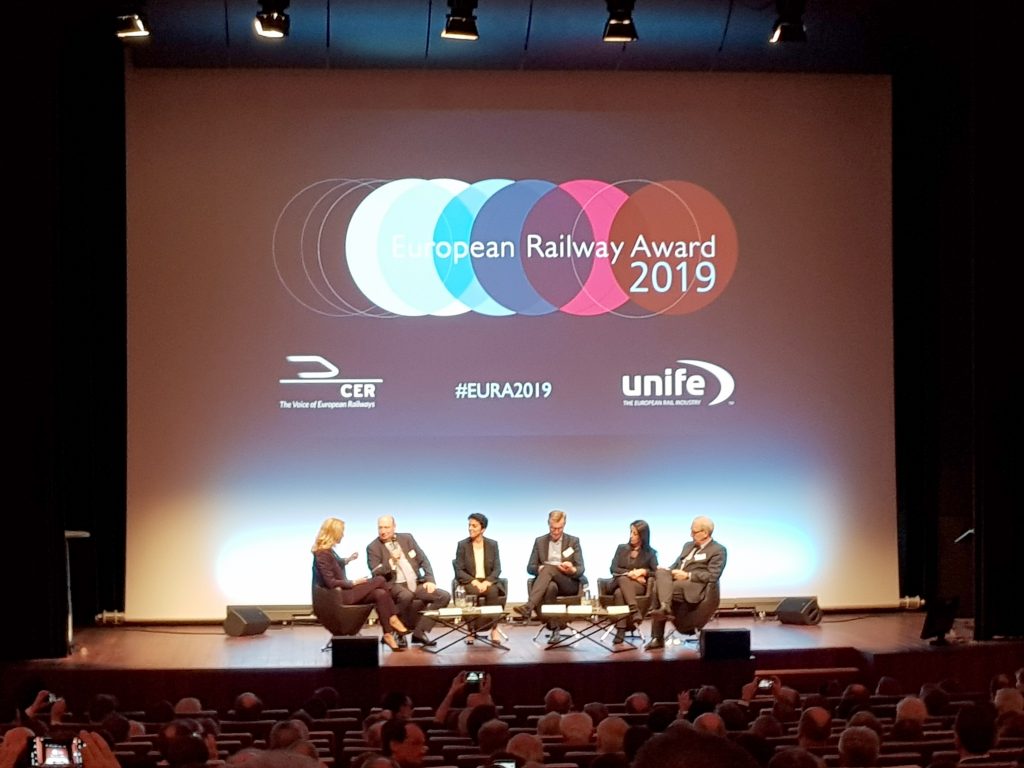 ALTPRO representatives participated at the „European Railway Award“, an annual event co-organized by UNIFE and CER on 20th of February 2019. The event was held at the Royal Museum of Fine Arts of Belgium and gathered around 500 participants.

There was a panel discussion on the topic of „Strong railway network for European mobility“ which attracted key people involved in European railway affairs – Mr. Henrik Hololei (Director-General for Mobility and Transport), Mrs. Karima Delli (Chair of the European Parliament’s Transport and Tourism Committee), Matthias Ruete (European coordinator for ERTMS), Mr. Crister Fritzson (CER Chair and CEO of SJ (Sweden)) and Sabrina Soussan (UNIFE Chair and CEO of Siemens Mobility). The discussion highlighted the fact that the rail is seeing its best years, thanks to CEF programme which contributed with over 16 billion EUR in investments in more than 250 railway projects which is around 70% of the total amount CEF has to offer. The railway is the key in the battle against climate changes and it is becoming increasingly important as a part of the sustainable mobility system.

The event was finalized by awarding the „European Railway Award“ for extraordinary accomplishments, creativity and innovative contribution to present and future railway in Europe. This year the Award has been awarded for the 12. time and the winner was Mrs. Catherine Trautmann. She was given the Award for her long term contribution to the research and development in the area of the railway industry in Europe. As Mayor of Strasbourg, Mrs. Trautmann initiated the creation of the Strasbourg tramway (inaugurated in November 1994), and advocated for the construction of a high-speed rail line between Paris and Strasbourg. As a Member (and a Vice-President) of the European Parliament’s Committee on Industry, Research and Energy from 2004 until 2014, Mrs. Trautmann supported policies to foster the growth of Europe’s rail supply industry. Since October 2014, as European Coordinator for the North Sea–Baltic Core Network Corridor (part of the EU’s Trans-European Transport Network or TEN-T), Mrs. Trautmann has played a leading role in forging an agreement between the European Commission and five EU Member States to implement the Rail Baltica project.

ALTPRO representatives used their Bruxelles visit to conduct a range of bilateral meetings with the key people of railway companies and they participated in the SME Committee annual meeting. ALTPRO is a long term member of UNIFE’s SME Committee, which aims to promote rail and its development in Europe.