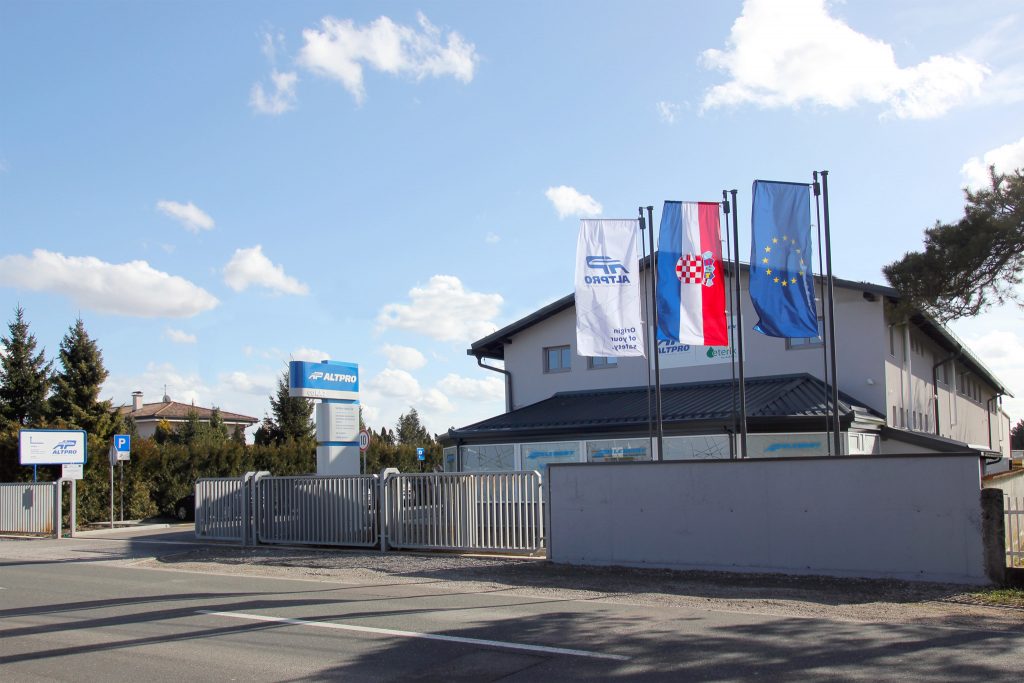 75 new jobs have been opened in the development and production center ODRA 2, which has expanded ALTPRO’s capacity for innovation, development and production of signaling and safety devices for infrastructure and safety devices for vehicles. The investment was financed by HBOR funds from the INVENTIONS program, a HAMAG-BICRO guarantee and grants from EU funds.

Zagreb, April 27, 2018 – ODRA 2, a new production center of the company ALTPRO, which has been engaged in the development and production of signaling and safety equipment for railway vehicles and infrastructure for 24 years, was officially opened on Friday, April 27 in Zagreb.

The opening of the new center was also attended by Deputy Prime Minister and Minister of Economy, Entrepreneurship and Crafts Martina Dalić.

“ALTPRO is an example of a manufacturer that creates high value-added products and an example of the use of modern technologies and strong exports. This is exactly the direction in which we want Croatian industry to strengthen. ALTPRO shows how EU funds can be used to support this type of production” said Minister Dalić, announcing that she would soon send a new proposal to the Parliament on state aid for research and development activities in the economy.

“This will open the possibility that entrepreneurs like ALTPRO who invest in research and development can use these costs to reduce the tax base, or as support in the form of reducing corporate taxes. This support will not exclude entrepreneurs from using other incentives provided by the state, either through European funds or through the Investment Promotion Act “, said Minister Dalić.

The investment will enable the opening of 75 new jobs of all qualifications in the field of development, sales and marketing, engineering, production and quality control, as well as additional jobs with subcontractors.

Director of ALTPRO, Zvonimir Viduka, pointed out at the opening of the center that innovations for export and investment in employee development have remained the foundation of the company’s development and make it globally competitive and ready for all market challenges and stressed: “We do not worry about orders because, thanks to the new investment, we are able to take over some larger jobs that we have not been able to count on so far. We are already working on the development of new innovative products according to the requirements of the world market. Our exports are continuously increasing, and the new capacity has brought new potential customers who were not there before”. He also stressed that this is the company’s second investment in the last six years, with which ALTPRO has become the largest manufacturer of signaling and safety devices, not only in Croatia, than in this part of Europe.

ALTPRO actively withdraws European Union funds to improve its business, including aid for research and development, construction and equipping, product certification, internationalization of business and promotion of the company’s activities at trade fairs. Thus, the investment was financed by HBOR funds from the INVENTIONS program, a guarantee from HAMAG-BICRO and grants from EU funds through the program of the Ministry of Economy, Entrepreneurship and Crafts – “Competence and Development of SMEs.”

Through one third of the investment, the investment in research and development equipment was financed, as well as a 100% increase in production capacities in the entire company. The new plant will enable shorter development, production and delivery times, greater precision and timely responses to customer needs.

ALTPRO is the only company in Croatia and the region that has a completely domestic development and production of signal safety devices for railways. ALTPRO has so far delivered its products to 47 countries on 6 continents, and each new investment opens up new opportunities in new markets.

ALTPRO started operating in 1994 and is engaged in the development and production of signaling and safety equipment for railway vehicles and infrastructure.

The company’s products are fully developed on the basis of their own knowledge and have proven their competitiveness in the global market. With two niches of complete safety systems for rail vehicles and infrastructure, ALTPRO is currently one of several manufacturers of the above equipment in the world.

All safety devices have certificates of compliance with EU standards issued by independent organizations such as TÜV Rheinland because this is a prerequisite for export.

The company’s work has been confirmed by numerous economic and state recognitions, as well as awards at innovation fairs around the world. ALTPRO is the winner of 3 Golden kuna awards of the Croatian Chamber of Commerce, the last of which is in 2017, for the most successful innovation.