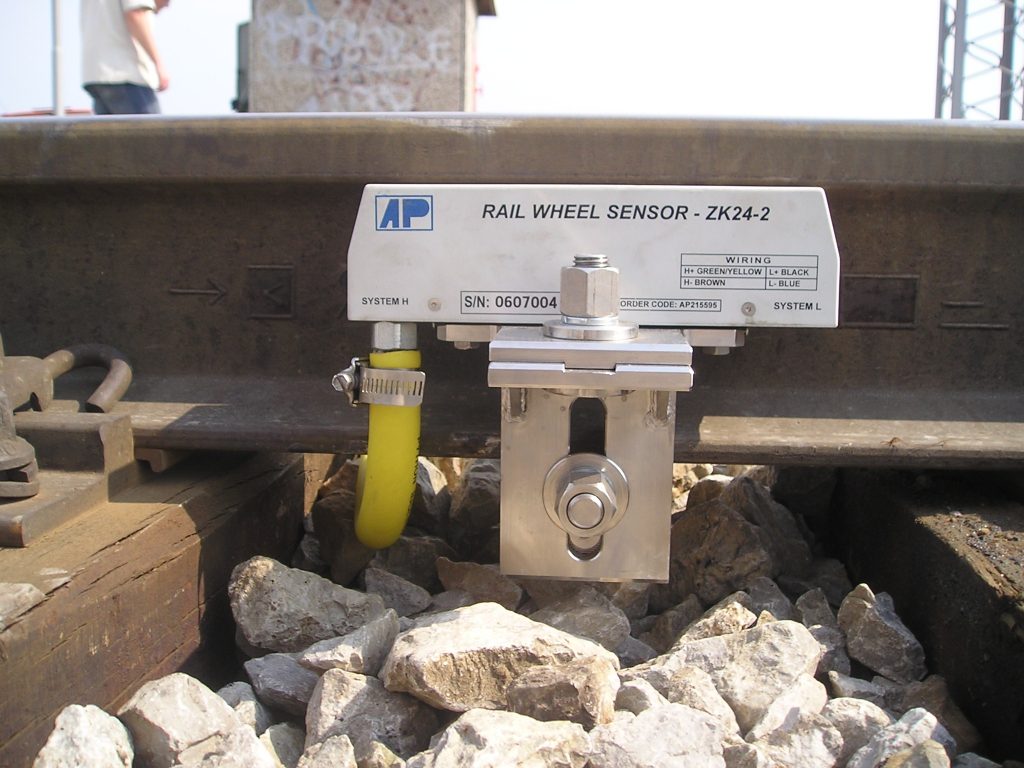 In southeastern Europe most of the currently installed level crossing systems is old relay-based systems that use punctual double-channel wheel detection for switching on/off. Such level crossings were installed during 1960-ies and 1970-ies, and most of them still use old magnetic wheel detectors with reed-relay produced by Siemens (two detectors per switch-on point on both sides of the road and two detectors per switch-off point), or mechanical treadles produced by Silec. The operation of such magnetic detector is based on the permanent magnetism and good condition of reed-relay contact, which is already in the device, mounted on the rail. In such a long operating time period (>30 years) the permanent magnet looses the strength of the magnetic field and the contact material of the reed-relay is rather worn. The maintenance and repair of the magnetic detectors are every year more difficult and the number of failures is increased in recent years.

Electronic wheel sensors usually don’t have the same principle of outputting the wheel presence information as magnetic detectors and mechanical treadles; the sensor usually has current or voltage output and magnetic detector has relay contact output. For direct replacement of magnetic detectors with electronic wheel sensors on relay level crossing systems the interface of current or voltage signal to relay contact or optocoupler is needed. Figure 1 shows how one switch-on a detection system (e.g. on the left side of the road) is performed using the wheel detection system UTR.

Wheel sensor ZK24-2 was developed in company Altpro together with the axle counter BO1 and is used as a wheel detection component in the axle counter type BO23 and BO1, which is in regular operation in automatic block on Croatian Railways for several years. Croatian Railways recently decided to replace old magnetic detectors on relay level crossings and Altpro developed the interface module UTR245 to be able to connect the wheel sensor ZK24-2 to the relay level crossing and replace the magnetic detectors.

The very important requirement is that the sensing systems (H and L, see figure 1) in the sensor are completely separated, both functionally and galvanically, to be able to replace two magnetic detectors with one sensor ZK24-2. Each sensing system works independently and is based on the inductive principle with different frequency of the magnetic field for each system. Electronic circuitry for wheel signal evaluation on each system is already integrated into the sensor’s case and filled with special compound for water protection class IP68. Two wires of the 4-wire sensor cable are dedicated to each sensing system; each system receives the DC power supply via these two wires and gives the wheel pulse signal to the level crossing system via the same two wires. A signal is provided as a DC current loop with higher current without the wheel presence and lower current when the wheel flange is present above the sensor. The current loop provides very high distance between the sensor ZK24-2 and the interface module UTR245; e.g. with wire diameter 0.9mm the maximal distance is 17.8km.

The sensor ZK24-2 is mounted on the inner side of the rail using the universal mounting clamp fixed to the rail foot (figure 2). It is no need for rail drilling and the same mounting clamp can be used on rail types S45…S49…UIC54…UIC60 (including all types between).

The big advantage of the wheel sensor ZK24-2 is very simple and quick installation and maintenance. Installation requires no electrical adjustment (no potentiometers or similar adjustment); only mechanical position adjustment using the plastic template is required. Maintenance is reduced only to six-month period position check using the plastic template. In case the sensor drops-away from the rail for any reason, both systems will output the low current state continuously (fail-safe).

Interface module UTR245 contains two galvanically separated channels that convert a current loop signal from each system of the wheel sensor ZK24-2 to the safety relay and optocoupler output (figure 1). The box of module UTR245 is provided for mounting on DIN-rail (99.7mm wide box) or panel anywhere in the level crossing housing or cabinet. Figure 3 shows 3 interface modules UTR245/ITR245 together with lightning protection modules ZUT (also on DIN-rail) installed in one level crossing housing on Croatian Railways (two double wheel detectors for switching-on and one for switching-off).

There are 3 types of outputs on each channel of the module UTR245: two optocouplers and one safety relay. One optocoupler provides a pulse for each wheel that passes the sensor. Safety relay operates on the first train wheel and returns to the basic state with time delay (5s; adjustable on user’s request) after the passage of the last wheel. The other optocoupler operates the same way as the safety relay, but only in one direction of a train movement. The appropriate optocoupler on the other channel operates only for the other direction of a train movement.

Interface module UTR245 also provides the optimal power supply for the wheel sensor ZK24-2 (48V DC, separate power for each channel). Power supply for each sensing system on the sensor is galvanically isolated from the main channel power (15V…36V DC) and has continuous short-circuit protection.

Except the replacement of the mechanical and magnetic treadles (which was the main reason for development) mostly used on relay level crossing systems, the wheel detection system UTR can be applied in newer microprocessor level crossing systems. There is pulse optocoupler output on each channel that gives a pulse for each wheel passage over the sensor and microprocessor system can use these outputs to count axles, to determine the movement direction, etc. Even the train movement direction determination doesn’t have to be implemented in the software of the system because the interface module UTR245 also has direction dependent optocoupler outputs. One direction output activates only for train movement from system H to system L of the sensor ZK24-2, and the other direction output activates only for train movement from system L to system H. Using both direction dependent optocoupler outputs and pulse optocoupler outputs on both channels (total 4 digital inputs on microprocessor system per wheel detection point) can make the software of the level crossing system very simple and safe.

There are many different hardware structures of the level crossing systems; many systems have two completely separated hardware channels including the power supply system and batteries. Two power supply channels are on some types of level crossings galvanically isolated. The wheel detection system UTR has both in wheel sensor and in interface module two galvanically isolated channels, so one channel can be connected to the first power supply of the level crossing, and the other channel can be connected to the second power supply. Example to this are relay level crossings on Croatian Railways; they have two completely separated systems with separate power supply for each system, and one magnetic detector is provided at the switch-on point for each system (two detectors total per switch-on point). Thanks to galvanic separation of channels in wheel detection system UTR, both magnetic detectors can be replaced with only one wheel sensor ZK24-2 and interface module UTR245.

The replacement of older devices and the possibility of application in new microprocessor signalling systems make the wheel detection system UTR/ITR very universal in railway signalling.